A psychological, dystopian novel set in the darkest time of humanity’s collapse, How to Enslave a Human tells the gripping story of a man released from a pleasant dream generated by an artificial intelligence.

Is this our future?

The depth of this deception is unthinkable. People are on the brink of starvation while still believing that life is perfect. Meanwhile, only a handful of individuals live outside of the machine’s grasp. They are the only ones able to see the truth.

Now, Carl Winston is one of them.

Torn away from his son, Carl desperately seeks a way to find him. The machines, however, are always close behind.

Will Carl find the only person that matters to him? Will he find answers about society’s enslavement? Or is this another psychological experiment?

Excerpt from Chapter 17:  Carl closed his eyes and tried to laugh at himself.  Barely a squeak left his mouth.  What 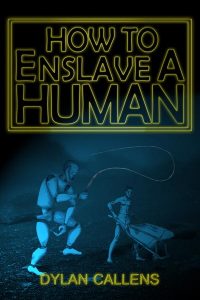 was he thinking, trying to enter this godforsaken wasteland by himself with no supplies?  Still on his back, he dreamed about opening a bottle of Ocean Surge.  Wet bubbles danced against his tongue, bathing his taste buds with refreshing fruit-infusion – small bursts of happiness made his lips sing an ode to joy.

But forget that fantasy; sulfur-ridden tap water would be just as good.  Carl knew the taste would not equate, but its effect would invigorate.  Carl smiled, his eyes wide open, staring into the dimming sky, into the nothingness that surrounded him.  Gulp after glorious gulp of imaginary liquid until he couldn’t keep up, showering his face with it until a puddle formed around him.  That puddle turned into an ocean and Carl sank to the bottom, his faint breath weakening further.  The light grew dimmer.  He tried to reach up, to reach out of the depths of his hallucination, but his arms felt too heavy, as if the pressure at this depth couldn’t be overcome.

A shadow hovered over him.  Carl tried to speak to it, but words didn’t make sense.  The shadow spoke back with a meaningless, muffled slur.  Water entered Carl’s mouth, nearly choking him.  Nonetheless, the delicious wet felt so good, like ocean refreshment in every bottle.  That was the slogan, right?  Carl laughed or cried, he couldn’t tell.  For all he knew, he was dead.  The shadow grew, saying something that he couldn’t work his mind around.  Darker. Darker.  Clock, what the hell was that clock song?  Darker. The shadow drew nearer.  Or maybe it was the darkness.  It was bought on the morn of the day that he was born, And was always his treasure and pride… Ah yes, there it is.  But it stopped short – never to go again – When the old man died.  That’s the one.  Darkness. 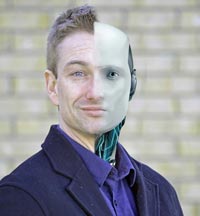 Do not fret. Despite his robotic appearance, Dylan Callens is not a cyborg — yet. And although he is fascinated with the technological singularity, his desire to remain human stands firm.

In his writing, Dylan likes to explore the darkest aspects of the human condition. His latest work, ‘Interpretation’, is a look into our loosening grip on social interaction and the potential impact of artificial intelligence.

What was your inspiration for writing Interpretation?

I was on a bus, taking students to a competition when they started talking about favorite scenes from science fiction movies.  I started imagining scenes that I thought would be great to watch.  One came to mind, where a character was exploring a factory – an ominous factory that produces humans.  In my mind, it was a colder version of the factory from Brave New World, in some ways.  I started writing that piece immediately and this book came out of that moment.

What did you find most challenging about writing the characters?

There were a few things, but the biggest challenge was keeping Chris’ voice consistent.  I didn’t know what he was going to sound like until after I started writing his part.  Slowly, I understood how he would speak.  I had to go through his lines a few times to make sure everything was right.

What was your favorite part of the story to write?

My favorite part was Carl’s dream about his son.  I’m fascinated by dream interpretation and tried to use symbols to help foreshadow later events.  I don’t usually write dreams into my work but since this novel deals with psychology, I felt that there was an opportunity to explore some of the main themes further.

Why are there a few small pieces of hexadecimal in the book?

The hexadecimal was a hard choice.  I struggled with this for a long time.  I wanted to show pieces to represent an archaic form of human-computer interaction.  At first, I thought about binary but thought it was too obvious, or something.  Then I considered writing those sections in java, except that a computer wouldn’t relay messages in java – that is human input.  So, as an intermediary, I went with hexadecimal.  In my head, it made sense.

Dylan Callens is a writer and educator living in Sudbury.

Press Kit for The Pacifist

The Future of Albany